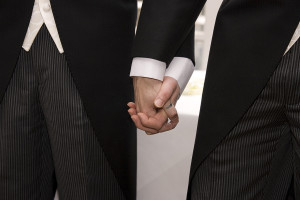 Sexuality can be an incredibly difficult subject to grapple with. It is a struggle between what the heart wants and what the mind wants; what the individual wants and what society wants.

It isn’t uncommon for someone who is combating his sexuality to attach himself to women to convince himself of how he thinks he should feel. Gay men sometimes engage in heterosexual relationships to either test or hide their true feelings.

“He used me.”
It is completely normal for a woman in this situation to feel like her boyfriend used her as a cover-up. You begin to play back the conversations the two of you had and think about the meals, movie nights and intimate moments you shared. “Was it all a lie? Was he just pretending the whole time? Did he mean any of the things he said to me? Did he ever actually love me?” These unanswered questions are the hardest hurdles to jump over in this closure process.

“He doesn’t care about me at all.”
After contemplating his true feelings about you and the relationship you had or still have, anger begins to well up inside of you. You start to wonder if he feels any remorse, if he cares about your feelings, if he had this intention of hurting you all along. “How could he do this to me? How could he disregard my feelings? Didn’t he think about how this would affect me?” These pending thoughts are the next bridges to be crossed in this closure process.

“This isn’t about me. This is about him.”
In time you realize the way he treated you didn’t have as much to do with you as you originally thought it did. You realize his actions weren’t with ill intentions, that he was trying to find himself and that you may have even helped him to do so. “How long has he been dealing with this? How is he holding up? Why couldn’t I have knowingly been there for him?” He’s battling his sexuality and you happened to get tangled in the web of his confusion. It’s difficult not only for you, but for him, too.

It is vital to understand that sexuality is by no means black and white. While he may favor men, he is fully capable of loving women, too. It is more than likely his feelings for you were just as real as your feelings for him.

Remember that his sexual orientation does not change the kind of person he is. Sexuality is not a personality trait. If he was funny before, he is still funny now. If
Try talking to him. Be inquisitive, yet respectful. Ask him about his feelings, his motives and his plans for the future. The more you know, the clearer your perspective can become. Keep in mind his happiness was once important to you. It should still be important now.

So don’t take it personally. He has no vendetta against you. He was not planning on hurting you. You were engulfed in his quest to finding himself, so sleep easy knowing you may have actually helped change his life.